Features
Today I will be testing out the HP DV6-6145TX which sits up pretty high in the DV6 range of notebooks from HP. It sits pretty competitively in the market, being a 2nd Gen Core i7 laptop in the par $1000 range.  Out of the box you get yourself nothing more than the usual, the power cable, battery, start guide and the unit itself, pretty exciting stuff already!
Priced at $999, it offers customers a pretty good deal for what it can do. For the price you get yourself a 2nd Gen CPU with a 1GB ATI 6770M graphics card. Let’s have a look at the specs in detail:

A quick glance over the specs suggests it to be a pretty decent looking notebook internally. The processor and graphics card alone might be quite appealing to most at first glance.

Design
Unpacking the unit, one can’t help but be immediately attracted to its brushed aluminium lid. It gives it a very slick and stylish look. Opening the lid I notice the complete outer keyboard area with the same material. It looks neat and won’t be very sticky with your fingerprint which is always helpful. The same cannot be said about the mouse pad though, even though it looks pretty with its illuminated outer line, your fingerprints stick to it like a bee to honey.

The keyboard itself is designed very well. It is comfortable to use and the reflective casing it sits in helps the keys stand out more. However without illuminating keys, all the darkness with the notebook itself can present a problem when typing up long documents at night. The keys can be quite difficult to read and you’ll find yourself spending more time fixing your typos than typing, unless of course you’re a super keyboard user!

The notebook is pretty average in size in relation to other 15.6” notebooks. The slick and curvy edges makes this look a bit smaller, that’s of course until your attempt to carry it. Weighing in at around 2.63kg, it isn’t the lightest of notebooks and can be a bit of a nuisance for those who use their notebooks on the run.

The DV6-6145TX dissipates heat pretty well. The exhaust is located on the left hand side of the notebook; however I couldn’t help but notice the left hand side of the notebook getting pretty warm under load, while the right hand side stays cold as ice. So if you use a keyboard with one hand, which happens to be your right hand, you will have a constantly cool laptop experience!
Overall, the look and feel of this notebook is one of the better ones I have seen. The simply and polished off look will definitely appeal to those looking for something stylish in their lives.

Performance
So, how does it fair up while actually using it? With the specs in the unit one would hope for impressive results. After doing the initial setup of the system, it took exactly 1 minute to boot from pressing the button to Windows opening up to a usable state. After a bit of tinkering with its settings and a few reboots later, I managed to get the boot down to 45secs, which is more than acceptable for a notebook. Installing small applications like Winrar, CloneDVD, VirtualCD and drivers for small external hardware took just a few seconds for each, which might not sound like a huge deal, but it’s always good to be assured that the small things in a computers life is not forgotten. Copying files from and to USB2 and USB3 drives came at standard acceptable speeds for a 5400RPM drive, nothing out of the ordinary here, and most users won’t be phazed with any file transfer speeds.

Sound on the DV6-6145TX is remarkably well. It features BeatsAudio Quad Speakers. You’ll find two speakers on the front bezel and two speakers just under the display mounted in a stylish silver housing. The audio is pretty loud, but struggles with low frequency sounds (in another words, no bass!) It has two headphone outputs just in case your pair has stereo plugs. The sound through headphones is much better, I got full responsiveness from all frequencies. The bass and high pitched sounds were very comfortable. For testing purposes I had a pair of Sennheiser HD201’s.

Our PCMark07 benchmark gave a result of 2175 PCMarks. The notebook blitz all CPU related tasks (as expected from a quad core i7!) but struggled at times with data related tasks like Video and 3D rendering to disk. Although the notebook CPU performs well, it is bottlenecked by the low hard drive speed. However plug in a USB3.0 hard drive into one of the ports to work off of, and you’ll notice improved transfer speeds.

Our 3DMark11 produced a result of P1517 3D Marks. And as like our previous benchmark, the CPU blitzed its side of the benchmark, but the graphics struggled at times, putting out an average of 10fps throughout each of the tests. Our Windows Experience Index gave the Graphics Gaming section a 6.4. Just a thought for mind however, these tests are designed to push the graphics card to perform out of its limits. For more accurate results check out our results for real work gaming.

Call of Duty Black Ops:
Installation time was under 10 minutes which is pretty decent for a 7.28GB Game installation. Loading up the game with default settings did prove a bit disastrous. Temp wise the notebook performed remarkably well. Temps alternated between 68-73 degress which are more than acceptable results for a notebook. Changes between gameplay and cut scenes/menu wasn’t any different. The games FPS was struggling and was fluctuating a fair amount. The FPS peaked in around the 56fps mark and its lowest point was a miserable 5fps during heavy action scenes with pre-animated sequences. In total over the 20min playing period my average was recorded at 22 FPS. Well below comfortable playing limit.

Crysis 2
Installation took a mere 5 minutes to complete. Loaded up the game with its default settings. Like our previous test, there wasn’t much of a change in temperatures from idling to actual gameplay. However, unlike our previous game which was mildly playable, Crysis 2 really struggled to get in a playable state. Throughout my 20min playing period I managed an average FPS of 18! Though it peaked at 46, it struggled to keep it up to a playable amount. Lowering the settings did improve the gameplay, but not enough for a smooth gameplay experience.

Following are the temps and performance recorded for different tasks. Our tests were based on the average temperate throughout a 20 minute time period: 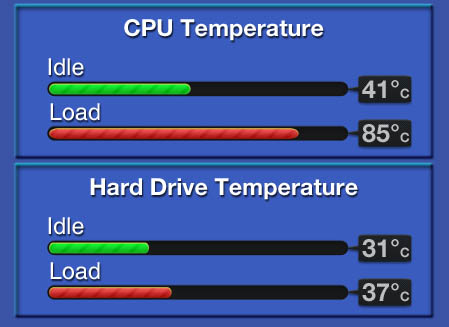 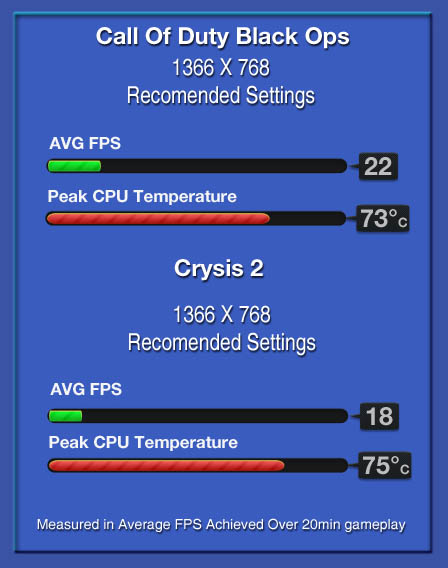 Overall the temps of the laptop were quite impressive, even under full load the CPU doesn't reach 80 degrees. The powerful exhaust on its side definitely helps in pushing the hot air out. 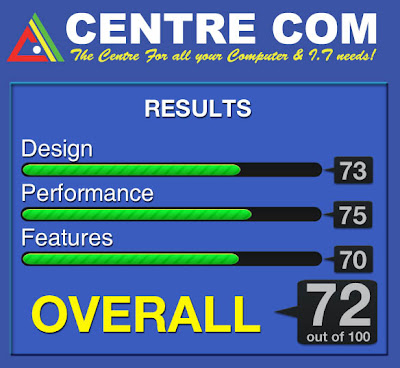 Overall, the unit performed well, even though it lacked in the heavy end gaming department (understandably) this laptop will perform more than enough for your everyday to higher end user. The Quad Core i7 processor on board definitely helps drive this laptop up performance wise. If you’re after a gaming laptop, you may need to fork out a little extra to get something with a bit more graphical power. Users will find this laptop to be pleasant on the eyes and easy on the wallet!

sahin.s@centrecom.com.au
Posted by Centre Com at 17:32