2nd for today is an Asus X54L series laptop! This is a slightly watered down version of the K53. With less memory and hard drive, this offers an even cheaper everyday laptop with greater versatility

Priced at $649, some might question if the difference in memory and drive space is actually worth the $50 difference, or is there something secret about this laptop were about to find out? Before we begin, let’s take a look at it guts:

Pretty average specs.
The factory restore feature on this unit is exactly identical to the previous ASUS review. The lack of extra memory however did cause it to take a little bit longer to complete.

The track pad itself has a feature called “Palm Proof Technology” which prevents mouse movement and accidental clicks with your palm while typing over keys that sit above the pad. And guess what? It works amazingly! I have always had the problem when typing my palms would accidently brush over the track pad and I’d inadvertently clicked away or cancelled a whole heap of work, well this laptop will help prevent errors like this! 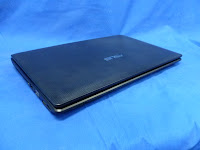 Unpacking the box was like deja-vu. It was only a few hours beforehand did I unpack a K53, so unpacking the X54 seemed like I was repeating the process. Exactly the same packaging for both units. However the manuals for this unit, instead of having its own pocket within the laptops cover, was placed on top of the actual unit and covered up. 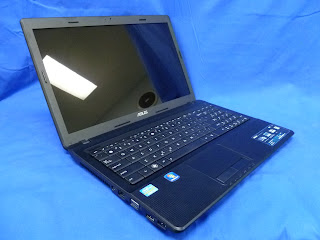 The unit itself looks a bit blander. The lid and keyboard surroundings are simple charcoal black matte plastic, and as simple as it is, I fell in love with it. It feels so much better than the other shiny laptops, and leaves absolutely no marks or prints anywhere on the unit! On the left side of the unit you have the exhaust, a USB 2.0 port, a USB 3.0 port, Ethernet and VGA output. And that’s all you get. Total of two USB ports; however one of them is a 3.0 port. Not exactly sure why they put USB3.0 on a lower end machine and left it out on the higher end. Marketing strategy maybe? On the front you’ll find the audio input and output, which I think is a wise place to put such ports and of course the memory card reader, which is placed in a slighter better position than the awkward K53. 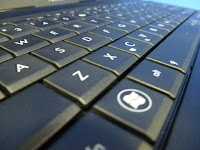 The keyboard is probably NOT one of the most comfortable keyboards I have used. Although it does stay as cool and quiet as the K53, the keys are slightly raised and don’t have its own mould for it to sit in. This can be a bit more annoying, as I found my fingers clipping the edges of neighbouring keys. If you have fingers like mini breadsticks, then you’d probably get away with it, but any chunk on those fingers and you could find yourself backspacing a number of times to fix your typos. It also encourages any food bits that might fall on it to really get in there and become a pain to get out, so if you tend to eat a bit of food in front of your laptop, might want to be careful in front of this unit as you may collect enough food in their to feed a family of laptop key animals. 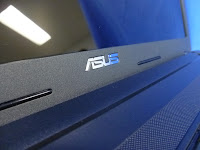 The notebook is your standard 15.6” Screen sized laptop, weighing in at 2.6Kgs it’s also not the lightest. The power adapter on the laptop is probably one of the most annoying things I have come across in a laptop. It is positioned on the left hand side of the unit, and it has a 90 degree plug. Also, the cable sits in front of the exhaust, with all hot air coming out of the unit, blowing right onto the power cable. Not exactly the wisest thing to do. I’m sure not all users would be comfortable with their laptops power cable heating up constantly. Unless you plug your cable in on an awkward angle, this could potentially be hazardous in the future. Felt like deja-vu? That’s because you may have read the exact paragraph in my previous review. Same problem on two models. How many more will I come across?

As I went to plug it in, I noticed the power end of the cable, to be ridiculously short and I had the AC unit on the floor because the cables length did not reach the top of the table. This could be a bit frustrating for those who plug it in and walk away to a lengthy distance to use their laptops.
Overall, I actually love the look and feel of this laptop, sure, the keys are a bit annoying, but it just feels so fricken awesome! It also feels slightly smaller and more compact than the K53 which makes it a better option for using it on the move.

Featuring the same Core i3 processor as the K53 I suspect it to perform similar. It does however have 2GB less memory to work with, which may be problematic for memory heavy software.
Booting the unit came in at 80s, which is a significant increase from a machine using the exact same processor. I think the lack of extra memory can be hold accountable for the difference.
The display of the unit is much better than the K53. It is much more comfortable to view and images like photos from a DSLR look very nice, HD Video clips also produced a good contrast between colours. Blacks and Whites were comfortable and not blotchy.

Sound on the X54L is relatively good. Although you’re not going to get boom box equivalent sound coming out of the speakers, it still manages to provide comfortable listening levels

We installed Photoshop CS5 64bit to test out how simple editing will run. Installation took only 8 minutes which is fairly good result, yet slightly longer than the K53. Launching Photoshop was also very responsive, coming in around the 20sec mark. Again, this is where the extra memory would help. It took me just a few seconds to open up 5-10mb files which are promising as these are the average sizes most users will be working with; however opening a 700mb file took roughly 90s. Slightly more than what I was hoping for. After half an hour or so working with the 700mb file, things did get quite sluggish and unresponsive. It was taking longer and longer to perform simple tasks, and this laptop, just wasn’t up to it. 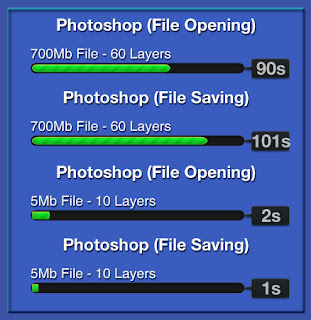 Having the same CPU as the K53, the X54L performed identically when it comes to simple software like Office, Excel and Outlook. Though it’s an i3 processor, it’s more than capable of handling majority of everyday user’s needs. I am becoming fonder of this i3 processor for the everyday user, as it costs less, produces less heat and consumes less power. It seems like an ideal specification to choose if you’re after all the above.

The CPU in this unit performed .02pts better than the K53. Being such a small amount, overall, it will perform no different from each other. The on board Intel HD Graphics 3000 processor however demonstrated why this is not a very good graphical machine, giving half the frame rate of the K53.

Our PCMark07 benchmark gave a result of 1862 PCMarks.

That’s roughly 300 marks higher than the K53. Although it struggled with any of the gaming side of things averaging 11.09FPS, it absolutely creamed the Video Playback and transcoding sections almost doubling the results of the K53. This is a remarkable outcome for a unit that has less memory and graphical power. It seems as though the Built-In Visuals with the Intel HD Graphics 3000 processor helps in doing simple graphical tasks, but struggles on the heavy end of things.

As this is not a gaming unit, and also being able to roughly predict the score I decided to skip over the 3DMark tests.

Temperatures were interesting with this unit. The hard drive itself barely flinched between idling and being under full load. At no point did the drive reach above 36 degrees. This is a fantastic outcome for such a unit. The unit itself as a whole, and not just the palm areas also remained unbelievably cool, even when the CPU was peaking at 70 degrees. I’m not sure where all that heat is going, but it’s good to know it’s actually going somewhere and not burning up the desk or my legs. I am somewhat bedazzled as to where this heat is actually going. 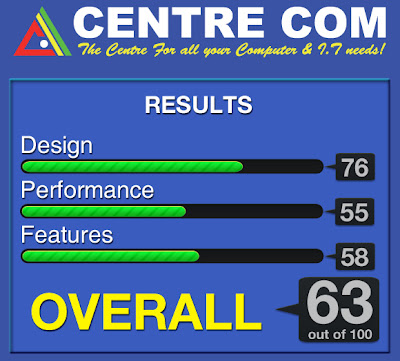 This unit has a similar target market of those for the K53. Like its successor, it is not aimed at heavy end users that require more power for multimedia applications and gaming. However, for the price this is an unbelievable machine. It has done more than just impressed me but given me hope for the lower end user market. It is good to see manufacturers can still produce machines that don’t have all the beef and oomph yet can still put out a wow factor.