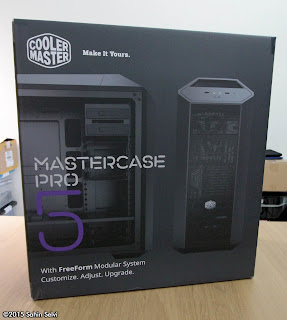 Let’s first take a look at some of the spec’s.

It all seems quite standard on paper but it’s what’s inside that matters. With its FreeForm™ Modular System the MasterCase 5 lets you adjust the exterior structure and aesthetic via a range of replacement panels and doors. Each choice changes the look and feel of the case, but also the flexibility of the interior layout.

Not only does the case come almost completely apart but it also features built-in clip-and-click panel which lets your move around your hard drives to suit your setup, or completely remove the bays and use the space for water cooling components. You’ll also find a space saving 2-bay drive cage in front of the PSU area as well as 2 SSD’s on top of the PSU cover which can be also mounted on the backside of the motherboard tray. 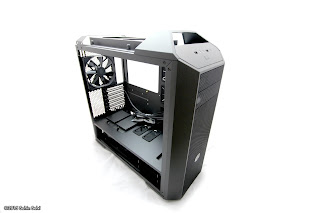 You can also buy all these parts from Cooler Master if you need it. For example you can add on another 3-bay drive cage which costs $15 on the Cooler Master store which is a pretty acceptable asking price if you ask me.

The top of the case is quite handy with a removable water cooler bracket that lets you mount the radiator outside of the case making installation that little bit extra; of course you can also completely remove the bracket and install something totally custom in its space instead. On either end of the bracket you also get 2 handles which makes moving it around so easy, handles get a big plus from and I love seeing it incorporated into the overall design of the case adding both functionality and making it aesthetically pleasing.

The front IO panel features the standard 2x USB3.0 ports, audio jacks and power buttons. This panel itself can also be modified with potential USB 3.1/C panels also available from Cooler Master. Going down the front of the case we see the full mesh front with 2 removable bay covers. All of this expectedly comes all apart. There are 2x 140mm fans supplied up on the front with support for 3 in total.

The rear features a standard 140mm fan on adjustable rails to move up and down with 7 expansion slots.

The PSU bay is nicely covered from the outside with thanks to a black plastic over the transparent window which blocks out the lower section allowing you to hide the PSU, as always with the MasterCase 5 Pro this is also changeable with the ability to remove the black plastic to reveal a completely transparent side panel (the window is slightly tinted so it’s not completely transparent).
The rear side of the motherboard tray reveals some neat cable management Velcro straps with adequately placed cable management grommets. Unfortunately it doesn’t feature any cable tie clips so you are stuck with just the fitted Velcro straps, an overlooked feature which I think is a big miss from Cooler Master.

Truth is I’ve been trying to think of some negatives of the case but none come to mind, it’s exceptionally built with a tonne of internal features enough for the casual builder or the full blown gaming rigs. Space is a bit limited by the mid tower categorisation of the case but if you’re looking to build a powerful gaming rig the Cooler Master MasterCase 5 Pro should definitely be up top on your list of possibilities with the ability of customizing it to suit your ideas. 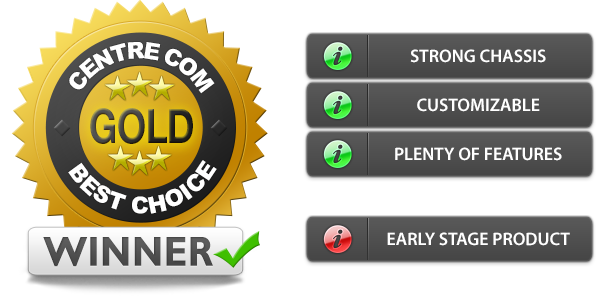