The D-Link DIR-890L Tri-Band AC3200 Gigabit Wireless Router is the mother of all routers. Resembling a gigantic mechanical ladybug, this monstrous router has the most advanced features and optimized for maximum speed, coverage and performance, the Wireless AC3200 Tri-Band Gigabit Router (DIR-890L) gives you ultra-enhanced network performance ideal for large homes and demanding users. Now you can experience uncompromised HD streaming and gaming on each and every connected device in and around your home. 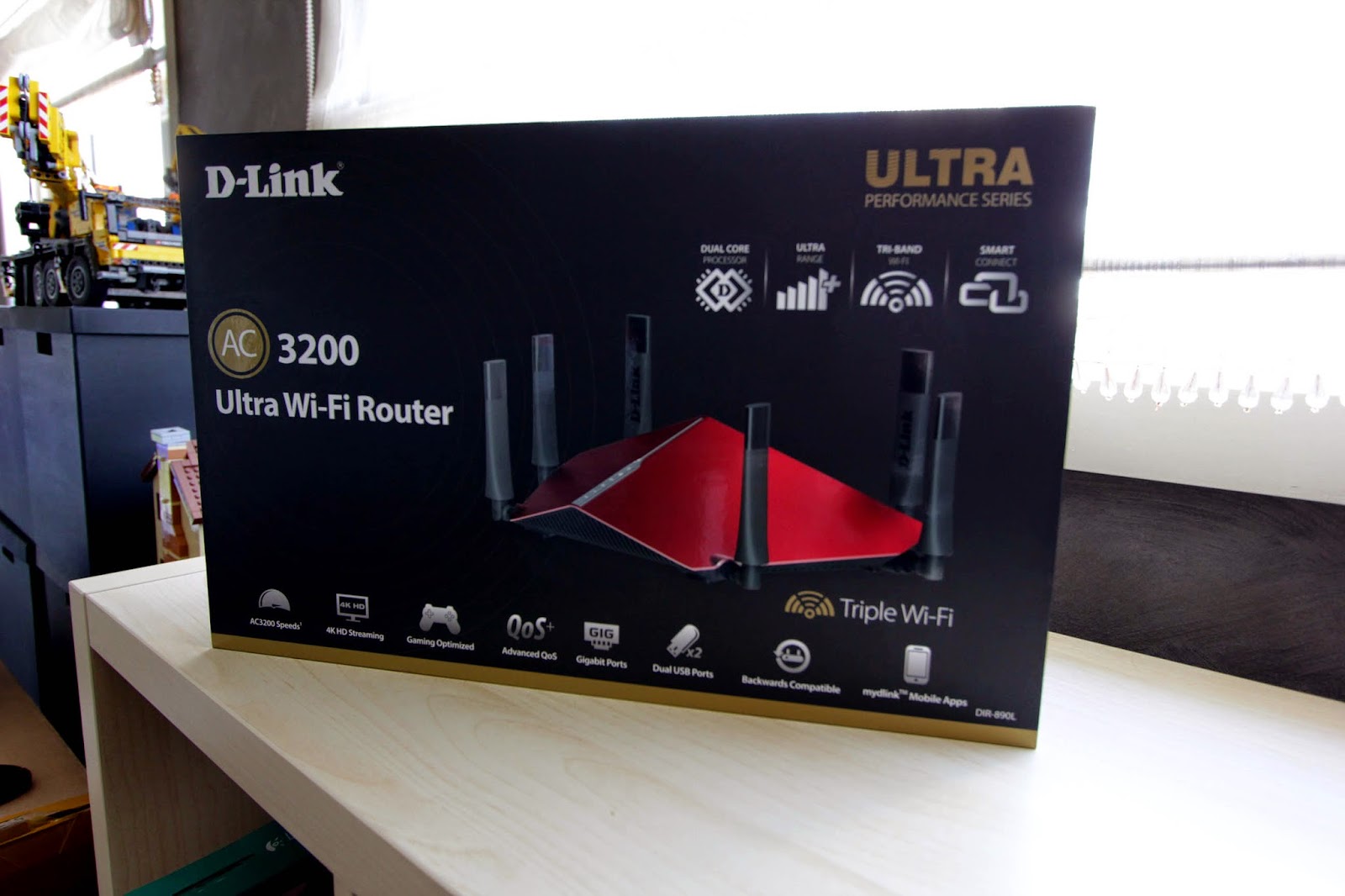 Let’s take a look at some of the features packed into this beefy router.

It’s a big box, that’s the first thing you will notice with this behemoth router. The box is elegantly designed with double layer foam around the insides ensuring even something heavy or sharp hitting it should keep the router itself pretty safe from damage.
Opening the box reveals the bright red triangular shaped top section of router meticulously positioned inside its custom foam box. I was surprised by how much space the router itsel;f actually takes. It really demonstrates the size of the router.

It’s big, it’s red and it has 6 large antennas sticking out from all angles is the best description I can give this router. You will need some decent storage space to put this router keeping in mind positioning to ensure best WiFi coverage, which in reality shouldn’t be an issue thanks to its well built and durable 6 antennas. Over previous large AC routers the D-Link DIR-890L does offer better build quality with a more solid build of its antennas.

The rear of the DIR-890L features a WAN port to connect your modem to, 4x gigabit Ethernet ports, a pair of USB ports (1x USB3.0, 1x USB2.0), AC plug, power button, reset pinhole and WPS button.
I am impressed with the build quality of the DIR-890L, it offers a much more premium feel than the majority of its competitors which should be standard for a circa $300 router only device

.
Performance:
Without making any changes or playing with settings I simply plugged in the power, connected the router to my switch and let it do the rest itself. It was up in less than a minute and I connected to it via its predefined WiFi setup (the details of the pre-configured WiFi comes as a sticker attached to the top of the router).

It’s fast, which was really never going to be an issue. The big test for this router was stability and reliability. It was up against my personal Asus RT-N56U which I’ve been using for the past 3 years for the simple fact it is one of the best routers out there. It’s never given me a dropout or issue over the past 3 years so the D-Link 890L had a fair bit to live up to, and it did so very well.

Streaming across the house was a breeze and even handled multiple streams very well. I tested it with a mixed level of content ranging from YouTube HD streaming, Plex Full-HD streaming and AppleTV iTunes streaming. It handled it all with ease, at the same time. Throughout the week it was in my house it didn't drop out, didn't time out and didn't have any issues with other devices in my network.

Distance with the 890L should not be an issue with any house. As long as it is wisely located to a more central location, even large homes should be able to access the net at full speed.

With a device like this, what you’re paying for is the power of your WiFi. Standard modem/router combos often do the job but handle multiple WiFi streams badly. With more and more of our devices requiring some sort of WiFi connectivity and even with major streaming service like Netflix and Presto becoming more and more popular people will be looking for ways to stream these services to the TV’s and mobile devices easily and without hiccups. The D-Link DIR-890L will let you do all the above and more. It’s built to handle the needs of busy WiFi households, with 6 high-gain antennas and triple-band WiFi, the DIR-890L has the juice to power your entire WiFi needs.