The Sound Blaster X7 is the ultimate upgrade for pro-gamers and audio enthusiasts. This feature-packed ultra-High Resolution Audio (HRA) device acts as an external USB DAC and a powerful audio amplifier with low-latency Bluetooth® connectivity and Dolby Digital decoder. 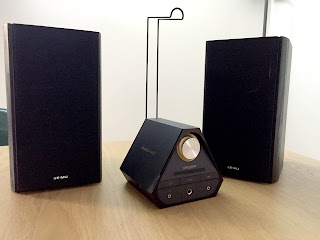 The spec list for the Creative Sound Blaster X7 is quite extensive so I’m going to have to cut it short just a bit and give you guys the important stuff. The X7 is an external powered USB DAC & AMP with 2 passive speaker outputs pumping 100w (2x 50w @ 4Ω). There is an impedance switcher for 4Ω to 8Ω to suit your speakers. The X7 also comes loaded with a 24-bit Sound Blaster Audio Processor and is certified for Dolby Digital 5.1 decoding. The high-fidelity DAC supports up to 24-bit/192kHz which should suit any type of user. The built-in 600Ω Headphone amp delivers powerful and pristine audio with enough power to drive high end headphones. The X7 also comes with some standard Creative feature sets like CrystalVoice™. As an added sweetener the X7 also comes with built-in Bluetooth which can be connected to a mobile device with the software that lets you control the settings on the X7 all through your mobile device, pretty neat feature and with my experience, seems to work quite well!

Alright so let’s have a look at the physical unit, around the front side you’ll find a large round knob which is your volume controller, dual-array mic just below that and microphone and headphone input/outputs. You’ll find 2 headphone outputs for both 3.5mm and 6.3mm headphone jacks. The front is basic, clean and simple. My only gripe with the front would be the volume knob, it doesn’t have much weight to it and no start and end point, there’s also no click or any sorts of force feedback to give a bit of extra feeling to the knob.

Around the back is where you’ll find all your outputs (and inputs). Starting at the top you’ll find 2 passive speaker outputs for a pair of bookshelf speakers. This is where my first gripe with the X7 begins. Creative should’ve ditched the passive speakers for a pair of TRS outputs for powered monitor speakers. This would be much more appealing to audio professionals who generally run powered monitor speakers. The good news for gamers is the X7 does come with surround sound outputs to suit pretty much any generic speakers system on the market.

As for inputs you get a standard optical and RCA suitable for game consoles and external media players. You’ll also find a neat little headphone stand which attaches into the rear of the X7. It’s nothing special and just a simple single piece of metal rod but it adds a good look and definitely comes in handy.

Luckily for I was also provided with a pair of E-MU XM7 bookshelf speakers which is touted to be the perfect companion for the Sound Blaster X7. The XM7’s kind of both impressed and left me wanting more. Don’t be worried about the compact size, the XM7’s are LOUD, very loud in fact and will definitely be a huge upgrade over the standard surround systems going around these days. They do however lack good bass response. With 5” speakers its already expected that you’re not going to be getting a bassy sound, but the XM7’s don’t handle it well and if you don’t have a subwoofer connected the X7 it can start to get a tinny sounding at high volumes. Which leads me to my next point, you have to connect a subwoofer to the X7 to really enjoy the XM7’s. the XM7’s are a good mix between a standard hifi system and proper studio monitoring speakers. I pitched the XM7’s against my personal KRK Rokit’s and although the XM7’s aren’t as refined and flat sounding as the KRK’s, they do offer a better ‘hifi’ experience, they’re louder and have a wider stereo sound. This is good for people who are intending to use this more for a gaming and entertainment setup.

The X7 with the built-in mic also gives you an awesome upper hand. If you’ve got a high end pair of headphones chances are it aren’t going to have a mic. The beauty in the X7 is the built-in microphone which can be setup to record just in your direction, eliminating external sounds. By having a quality mic built the X7 allows you keep your current high end headphones without the need to buy another separate mic device. The built-in microphone is very clear, concise and will an awesome job for in-game chat, live broadcasting and even YouTube videos.

What the Creative Sound Blaster X7 provides is an all-in-one like entertainment hub. It’s got enough inputs and outputs to connect all your needed accessories all packaged in a neat USB case. The X7 is however powered by a wall outlet so it will chew up one of those. My only other gripe with the X7 is the software, not so much the interface software (which is actually very good) but the ASIO drivers. When I picked up the Creative Zx Sound Card one of the first things I noticed was a lack of ASIO drivers and constant hissing, buzzing and cracks. They eventually added in ASIO support but by the time that happened I had already moved on. With the X7 although it comes with ASIO drivers, something just isn’t right about it. Cubase simply didn’t like it and was causing constant errors, hangs and crashes and was generally a pain to work with. It does feel like Creative haven’t really put too much effort into their ASIO drivers which is a real shame because their high end boards like the Zx and ZxR have potential to be great devices for both gamers and audio producers.

The software of the X7 is really well made and a huge improvement over the original software that came with the Zx series cards. The menus are clear, easy to understand and have plenty of options to suit all types of users. Personally I turned off all effects and SBX Pro Studio filters, I found them all to water the sound down too emphasizing certain frequencies too much over others and generally just giving a muddy sound.

Overall you’re probably asking yourself is it worth it? Well that depends on what gear you have right now and what you’d like to achieve. Do you want an external soundcard that delivers exceptional sound? Do you have a high end headphone and need something good enough to power them? Do you want the best experience in games and entertainment? Do you want to connect a console or media player to your speakers?

If you answered ‘maybe’ or ‘yes’ to any of those questions then the Creative Sound Blaster X7 is probably suited for you. It is on the pricey side, however it does offer a whole lot more features than your standard sound card, it’s also external which is good for those with small cases or those running multiple GPU’s. the Sound Blaster X7 will be your long term sound card, it’s got enough features to be future proof for a while and it performs great. There’s a big chance your current speakers will work with the X7 so you won’t need to fork out extra for the XM7 bookshelf speakers which is a great plus. Make sure to consider the Creative Sound Blaster X7 for your next upgrade.