The Corsair Carbide Series Quiet 600Q is Corsair’s first foray into the world of Inverse ATX chassis. We’ll talk about Inverse layouts later on but first let’s talk about this case. The 600Q is the quiet version with solid panels and sound dampening material through the interior side panels. There’s also a 600C model which comes with a windowed side panel reminiscent of the 760T. 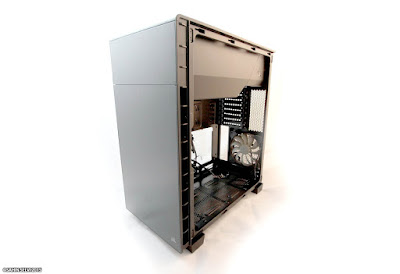 The Corsair Carbide 600Q is a full-tower ATX case with some neat features including a minimalist design, sound dampening for quiet operation, steel exterior, fully supports custom water-cooling rigs and is easy to clean with its removable dust covers. 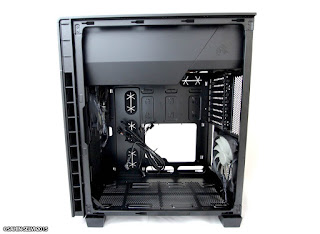 Looking from the exterior the 600Q is slick and very good looking. The black steel gives it a very elegant look with just a small Corsair sail logo on the front bottom. Along the top you’ll find your standard buttons and switches including 4x USB ports and a handy fan controller switch to go between 5, 7 and 12v. A simple fan controller like this adds a lot of value to cases and it’s something a lot of popular models lack so good to see Corsair including it on the 600Q. Still on the exterior the finish of the case does leave room for a lot of finger prints and general smudge to stick on, it’s a bit of a magnet for smudge marks so if that bothers you, you’ll find yourself wiping it down a few times. Luckily it comes off pretty easily with a damp cloth.

Going down the front of the case the entire front panel comes off to access the front fan mounts and dust filter. This also leads us to the interior where things get a little bit more interesting. 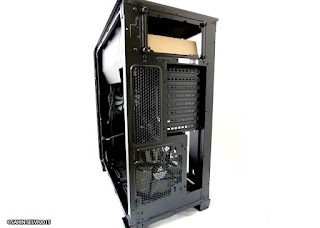 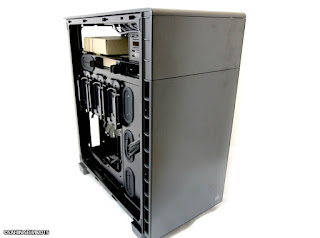 So the idea of inverse ATX is pretty simple, flip the motherboard tray upside down. That’s pretty much all it is, whether it has any thermal improvements is up for argument but it doesn’t look like there to be much of an improvement. What you do get however similar to the Air 540 is the chamber with the airflow coming in from the front to directly sweep over the GPU and CPU area. The bottom of the interior does come with full radiator support up to 360mm, whether you have it in push or pull is really up to you in this case but either way shouldn’t really matter. By being on the bottom you do have the advantage of the radiator sucking in fresh cool air so that’s something to think about. The bottom of the case does have large feet which do lift it off the ground quite high enough for you to use it in either push or pull. The full-sized dust filter that runs along bottom also helps the case avoid mass dust attacks. 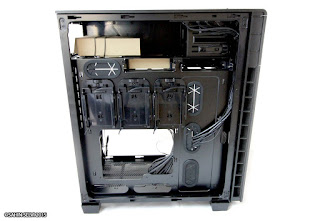 The top area of the case is accessible from the rear of the case which houses the 5.25” bays, PSU, SSD mounts and the 2 hard drive bays. In picture the rear of the case looks perfect, but closer inspection does show some weak points. First having only 2 hard drive bays, similar to the Air 540 which only has 2 drives the 600Q follows those footsteps. If you have an extra-long PSU you may find installing that plus any optical drives could be a bit cramped up in that space. Personally I don’t use internal optical drives anymore like many others so that one shouldn’t be too much of an issue. The Air 540 with its similar design was the only reason I didn’t go that route and it seems like Corsair has done the same thing for its first generation of a new model. Hopefully future revisions of the Air 540 and 600Q offer more drive bays.

The overall build quality is nothing less from what you’d expect from Corsair, it’s very well built and a solid design. Not a lot of warping with this case. Installing a system in the 600Q is relatively simple but could be a bit off a brain teaser due to its flipped nature. Some people may not also like the fact that all your shiny gear will be upside down but then again this is the solid panel version of the case so you won’t be seeing the internals which makes it a great PC for a bedroom or even a HTPC.
None the less one can’t ignore the simple elegance of the 600Q. It’s super slick, quiet and built to fit into any room.

So who is this case for exactly? Well if you're looking for an upgrade to something 'different' then this is what the 600Q offers. As long as you're comfortable with the hard drive drawbacks the Corsaor Carbide 600Q will give your system a 'wow' factor while offering full performance capabilities.