The MSI GT72S isn’t quite like the GT Titan laptop we reviewed last year but it is indeed almost equally punishing in its performance capabilities. 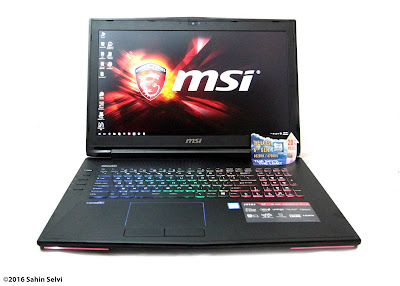 There is no doubt that this is one of the most powerful laptops on the market today, but before we get stuck into the full review let’s take a look at what’s powering this beast.

It is definitely a beast of a laptop and priced so at $3899. Now we all know that you can get a better performing desktop at these kinds of prices but that’s not what this about. The GT Titan was in a similar scenario yet we saw several of those units get sold because they offer a true desktop replacement for people who are on the move a lot or just like to have a laptop instead of a desktop as their daily PC.

The outer built of the GT72 is primarily made of plastic yet it doesn’t feel too flimsy or cheap. It does weigh a fair bit coming in at about 4KG so that weight does add a slightly more premium feel to the plastic. A laptop with these guts is definitely not thin and light and the GT72 is a great example of that. The shape is very similar of that on the GT Titan and MSI seems to be using similar casing for their entire high end gaming laptops.

Starting off on the screen the GT72 features a G-SYNC compatible display up to 75Hz. Now that is bloody awesome. 75Hz is the sweet point in my opinion and makes this almost a picture perfect display. It’s not as vibrant and colour accurate as IPS displays but it is totally built for the gamer in mind. The 75Hz G-SYNC displays lets you play pretty much any game without any tearing or artefacts up to 75fps, with which the GTX 980M does relatively easily with a lot of todays games
The GT72 has a plethora of ports all around the unit including Ethernet, USB3.0 and even USB 3.1 Type C. All the I/O ports on the laptop is more than sufficient for a gaming laptop and should be enough for all users. The GT72 does also come with a built-in Blu-ray drive. I’m not sure as to why we’re still seeing optical drives inside these laptops. It should be time where laptop manufacturers include the optical drive as an external drive or just don’t include one at all. There aren’t a lot of reasons to need an optical drive these days so it should slowly be phased out.

The keyboard on the GT72 is by SteelSeries as are all of MSI laptops and does feature the standard RGB backlit keys. The software included does let you change between a few different lighting options. I would like to see a few more options and just an overall better software experience from SteelSeries. The software and setting options hasn’t changed much over the years so it does feel like they’ve been a little lazy on further developing these technologies. The keyboard itself isn’t the greatest keyboard out there but it’s probably just me being used to mechanical keyboards so much.
Keeping up with software discussions the GT72 doesn’t come with too many bloatware but it is still there and gets very annoying very quickly (I’m talking to you Norton 360). Norton 360 was the biggest pain of them all constantly popping up and asking questions and reminding me I had 14 days to purchase the software before my PC becomes infected (great scare tactic Norton!). So instead I just proceeded to uninstall Norton all together.

Another annoying software package was MSI backup utility. Even after ticking the ‘don’t annoy me/I’ve already backed up’ option it popped regularly on occasion. If you do get one of these units for yourself I do encourage you to totally uninstall some of the bloatware that it comes loaded with. Totally improves your laptops performance and you’re no longer annoyed by all the popups.
The performance of this laptop is no less than one would expect. Booting up is exceptionally quick thanks to that SSD and with the high-end hardware inside it offers blazingly fast gaming performance.

The GTX 980M and built-in G-SYNC display with 75Hz gives this laptop an amazing gaming experience. Its super smooth gameplay thanks to the high-end specs makes this a pretty good gaming machine. If you’re one looking at getting a gaming machine it will be very hard to overlook the GT72, sure it’s expensive but you do get quite a few perks that are usually better on a full sized desktop.

Any game I threw at the GT72 it took like a piece of cake. The Division was solid 60fps at high settings, Unigine averaged 55fps for the extreme setting and other casual games like Cities Skylines performed exceptionally well.

When you get a gaming laptop like this, it’s hard to think about what kind of extras you’d like to have. It’s got a lot going on inside it and offers premium gaming features that do come at a premium price though. It’s hard to think of what more the GT72S needs. It’s an all-round incredible laptop that will offer you exceptional performance either on a desk, or on the move. 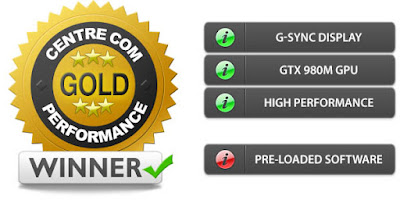