Acer’s not so ultra Ultrabook
Today’s brand new unit from Acer is the base model from its Ultrabook Aspire S Series. Although it looks like an Ultrabook, the internals of it doesn’t resemble one. So let’s take a look at what it is capable of.

Packaging on the A3 was very pretty and neat. The unit comes wrapped in a soft white cotton sleave and when revealed shows its true beauty. The silver brushed finish looks and feels fantastic. Looking back in the box you’ll find the usual accessories including manuals and warranty cards all packaged up underneath the laptops housing. Admiring the unit you’ll notice the rear plate is where the action is featuring standard-laptop-issue black plastic housing the power and connectivity ports and an exhaust. Not something all Ultrabooks would usually feature. You can’t help but feel slightly disappointed that having stretched the same silver lining along the back. The black plastic on Ultrabooks just reminds you of the sluggish notebooks you’ve always been carrying around, and let’s face it, when you have one of these; you want to forget about the past.

Opening the lid reveals the inner beauty of an Ultrabook. Slick, simple and impressive, the power button is featured blow the displays folding edge and sits at an angle which faces you directly. The keyboard is quite compact and features the traditional ‘Fn’ key to perform dual actions on single keys. This is where the beauty kind of lapses a bit. Typing on the keyboard is not as good as I’d expected. I found myself missing a lot of keys and not every key press registering the first time. It just lacked a finesse which one would expect that separates it from the rest of the herd. The track pad was even less impressive. Although it was very responsive with clicking, movement on the unit just was awkward and lacked any smoothness.

Lack of an SSD sees the unit boot up in around the 40sec mark, something most Core i7 processors already do. But once you’re ready to go, using it is not only a breeze but feels good. When in your hands the super light weightiness of it makes it feel like you’re holding a mobile phone or tablet. However, where this unit completely disappointed me was with its battery life. As an Ultrabook, it needs to rate at a minimum of 5 hours, however after 2hrs and 20min later, the unit was off. Now an important thing is what exactly was I doing to kill the battery that quickly? Well, I did things any average person would do. I browsed the internet on non-flash websites, I watched less than a handful of music videos on YouTube, watched parts of a movie by scrubbing through every few minutes, read a few emails, did general Windows tasks, and that was it. With tasks like this, the 2hour mark is what you would expect from standard 15” notebooks which they do, however I think what also contributes to this A3’s performance with its battery is the fact that it is only a 3-cell battery drawing up to 65w of power, compared to a Zenbook drawing only 35w, almost half the rating.

EDIT: Since writing the article, Acer has informed me that the laptop features an on board 20GB SSD. Let’s just clarify that, the 20GB is completely unusable and unreachable. It merely acts as a solid state memory module allowing it to resume instantaneously. It does not assist in boot-up or general computer use.

Overall, this laptop has quite the specific target market. For those who are after a unit that is extremely portable and stylish with enough features to run basic web applications, this could be of interest to you, however if your someone who multi-tasks a few load-heavy programs or enjoys watching a few movies or TV shows on the go, this is potentially a hit and miss. 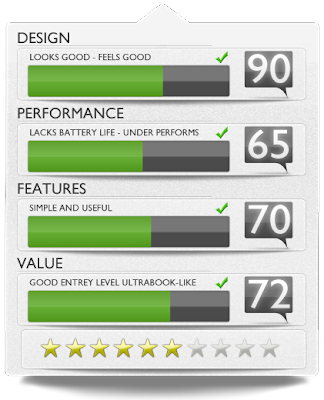