Budget laptop for the entry user!

Up today is the Acer Aspire AS5750. This budget laptop has the potential to offer good value for money with its decent specifications and good price point. So let’s take a look at what this baby can do.

Acer have done relatively well with its packaging. It is neat and organized with well-placed cautionary warning cards on the unit (tells you ways to maximise battery life and performance). Once I had the unit in my hands, I couldn’t help but feel like it was a bit cheap and plastic-y.

The lid is embossed with a repetitive pattern which stretches to the inside once you open the lid. The keyboard area is surrounded by the same embossed plastic. The keyboard keys are elevated with healthy sized gaps in between, so beware, if you enjoy munching on chips and cookies in front of your laptop while playing games or watching movies, you’re going to get a fair bit of it under the keys, it’s almost unavoidable (unless you stop eating, which let’s face it, isn’t going to happen). Apart from the elevated gaps, the full sized keyboard which includes the Num pad is generally quite comfortable to type on. You have your standard Fn keys laid across the keyboard including the arrow keys for brightness and volume control.

The sound of the unit is actually pretty good comparing against some of the past ear cringers I’ve heard, but what lets it down is the display. It lacks the clarity and sharpness of other laptops in its price range; however this could be something to do with the Intel HD Graphics. Past laptops I’ve reviewed with similar problems regarding the screen are usually those with a lower end graphics processor. The screen is glossy so reflection and glare can be problematic on it. Outdoor use on a sunny day could be turned into a complete waste of time trying to actually see what you’re doing.

Performance wise the laptop does well with what it has to offer, with an i3 processor, don’t expect to do that much high performance work on the unit. The laptop is perfectly suited for those who need an easy and simple home laptop to do some financing, bills, management and even a good unit for the kids and their homework. The laptop isn’t as nimble as you’d like it to be, weighing in around the 2.4Kg mark, it isn’t as ideal to carry around and work on. 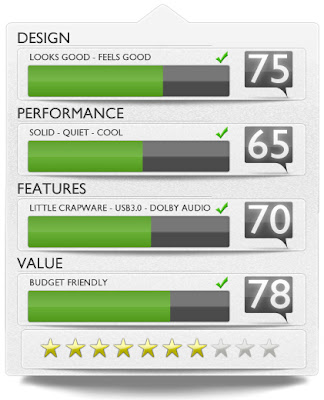 In our PCMark07 test it scored a respected 2066 PCMarks, which is higher than our previous Core i3 laptops which are definitely a positive sign for the unit. It seems like it puts what it has under the hood to full use. Our Cinebench tests also showed positive signs scoring 9.57fps for OpenGL test and 2.18pts for the CPU, which is definitely a respectable score for its hardware.

Overall the unit seems to hit a good point when it comes to getting a bang for your buck. It’s not perfect, but at its price point and simple features, it gives those low-end users a fantastic option to consider for their next laptops.