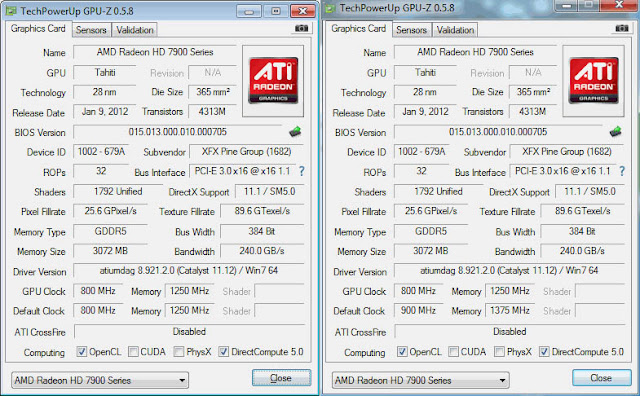 For testing we have gathered and built our system with the following parts and components:

Features
Unpacking the cards is like deja-vu from the 7970’s. Identical packaging’s all around will the same packaging layout across all the models. Good design consistency throughout.
Let’s take a look at the few features displayed across its packaging.

XFX claim its cards to feature Hydrocell Thermal Solution. This is a vapour chamber based on the same principles as heat-pipe technology, which uses a recirculation process and wick system for vaporization.

Ghost Thermal Technology allows the airflow from the fans to blow directly through the heat sink onto the PCB board itself. This allows for greater airflow on and around the card, helping keep the fans at lower speeds.

Both these fans are the Double Dissipation models which feature a custom heat sink which runs the length of the board topped off with 2 fans. They look and feel slick with the shiny aluminium encasing the heat sinks.

The cards are quite long and roughly the same dimensions as the flagship 7970’s so make sure you have adequate space in your case before eyeing out of these.

Performance
Now with our 7970 review, we did the review quite earlier than the release date, so we were stuck with the Driver software packaged with the released version. This turned out to be a slight downfall for us where in our performance tests, the cards just did not do as well as we expected and as well as it should have. So with the 7950’s we skipped over the installation CD and went straight to AMD to grab the latest available drivers for the cards, and we must say, what a massive difference!

For testing purposes we ran benchmarks including a spec-heavy selection of games, 3dMark11 and Heaven.

For our selection of games we had:

All our games were played at 1920x1080 with max settings on everything. For consistency purposes we played the same levels on all cards for equal length of time. Our results consisted of minimum and the average FPS of the games. At the same time we were recording the temperature of the card and system in general. 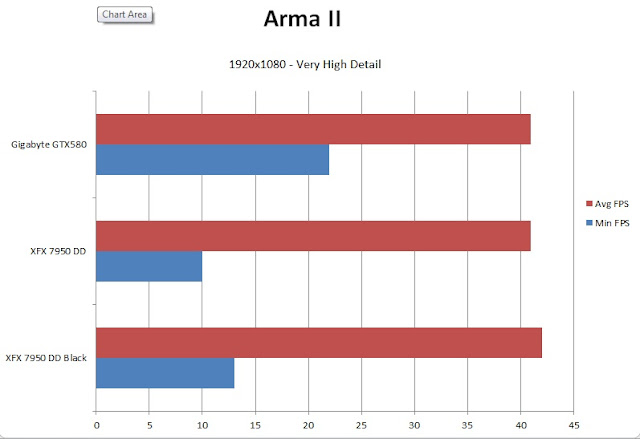 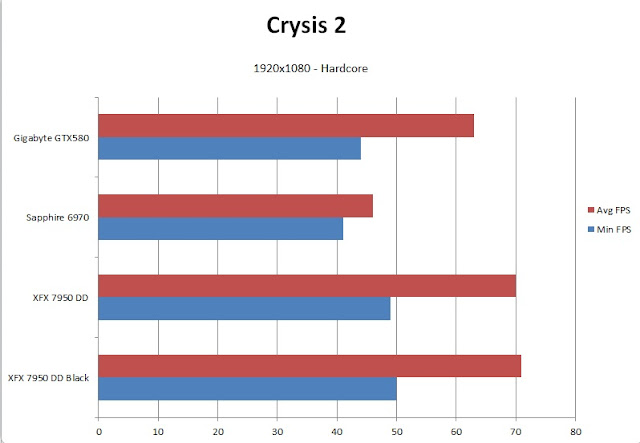 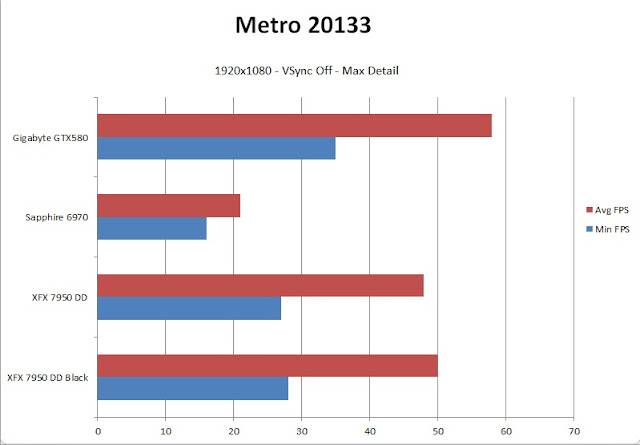 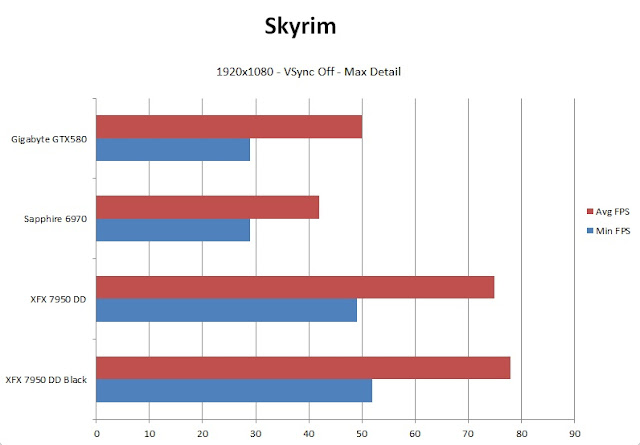 The cards performed very well and the clock differences showed in its results.

Our Heaven benchmarking software was set at Full HD resolution with maxed setting and extreme tessellation. After all, these cards are marketed as having very good capabilities with high tessellation models. The cards performed as below:

Looking at the results at first glance doesn’t show a massive difference; however the Min FPS has a difference of over 8 FPS.

Next we had 3DMark 11. Running at the extreme setting our cards performed following.

As expected the slightly higher clocked card came out on top.

Temperatures on the cards were actually impressive, idling at the 41 mark with peak of any of the two cards at 65. Having the same heat sink on both cards provided us with almost identical results. Not only were temperatures impressive but was relatively quiet, especially compared to the stock reference editions of the cards. All that mumbo jumbo XFX put on the card in relation to its thermal solutions seem not to be a gimmick but actual technology that does make a difference to the cards performance.

To finish up, these cards are fantastic. I’ve reviewed a fair few products at Centre Com and not a lot of products I’ve tested I’ve actually liked, sure I’ve enjoyed a lot of them and they have performed well, but there was something about these 7950’s that I haven’t found in other products yet. For its price tag you get yourself a magnificent card with solid performing results.