Up today is the newest addition the successful range of the Lenovo Y Series, the Y570. A few months ago I did the review on the Y560P which turned out to be an absolute monster of a laptop exceeding all expectations. The Y570 appears to be similar in design with beefed up specs, let’s take a look at the specifications.

From the Y560 we see an improvement on the Graphic Chip with switchable graphics, ensuring longer battery life for small tasks and additional USB3.0 ports.

Upon inspection of the box, one will notice the larger sized packaging. Open the box reveals cardboard goodness in a tight fit design. What I like about this particular one is the fact you don’t have to pull it up vertically to take it out. Sitting the package horizontally the lid opens to reveal the laptop sitting in its foam moulding.

Looking at the unit we see a distinctive orange line running around the edge of the screen, with the lid patterned by sparkling dots (in a cool tech kind of way, not a girly way).  Opening the lid reveals a purple brushed aluminium look with sleek touch buttons, a full sized keyboard with number pad and JBL speakers dominating the top section. Not sure who designed this and why they chose purple and orange as a colour scheme. A laptop like this could have used a sleek and glossy black casing.
Like other Lenovo units, the Y570 also features a One-Key recovery option to restore to factory settings, along with a very comfortable and ergonomic keyboard. The track pad feels very smooth and easy to use and doesn’t have that stickiness most laptops suffer from.

Similar to other Lenovo’s once again, the inputs are wisely located and do not obstruct one another. The dual USB3.0 ports and eSATA port add good connectivity to this unit. The display on this unit is fantastic. Very crisp and clear with excellent contrast and brightness. This is definitely one of the better screens on laptops on the market.  HD films look brilliant and coupled with the JBL speakers make it a good buy for movies on the go. The larger hard drive allows for a decent number of films you can carry with you at all times!

Packed into this unit is a Core i7-2670QM CPU running at 2.2GHz and a solid 8GB of memory to accompany it. An improvement over the Y560P, the Y570 adds a slightly higher clocked CPU with the same memory. Booting the unit came in at 51s for its first boot. It even displays this in a little popup when you first start the machine and even gives you options to try and improve that.
The sound being produced from the JBL speakers is fantastic. You really get a good punch of a sound for something so small and on a laptop. Usually with laptops tinny and ear cringing sound is inevitable but the JBL’s on the Y570 are fantastic. Let’s not forget you won’t be hearing audiophile quality sound, but it offers great sound for a laptop.

These results prove the extra grunt in the Y570 outperforms that of the Y560P. Comforting to know as it’s not always the case with new products. The CPU was the biggest surprise with a good 300marks improvement over its predecessor.

Multimedia applications ran like a breeze as expected, the Y560P performed will with Photoshop and After Effects and the Y570 is no less. This really is a solid performing laptop. The slower hard drive can occasionally slow down opening and saving files, but with USB3.0 ports at the helm, small issues like this can be avoided. 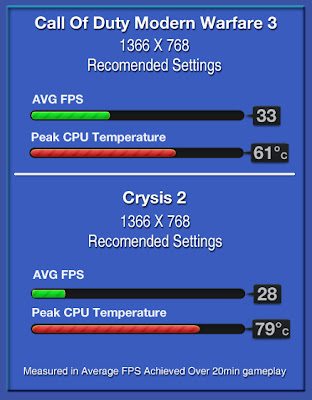 Temperatures were interesting with the unit. The hard drive and nVidia G555M chip were at 40 and 45 respectively while the Core i7 was mildly blazing in the low 50’s during idle. While on load you definitely hear the fan working its magic and pumping air out of the exhaust on the left hand side. I really would not recommend using this on a soft surface like a bed, as it can heat and pretty quickly. On load the GPU would hit about the 60 degree mark with the CPU reaching 70 which is a fantastic result overall, however I’m obliged to tell you the fan is definitely working its head off. It pushes good heat from the side of the unit.

Gaming was fantastic on the unit, quite surprising as well. By default it sets your graphics to relatively high settings with 2x AA enabled. With these settings gameplay was smooth and free of any hiccups. The Y560P was brilliant with games and it looks like with the beefed up 2GB Graphics chip on the Y570, gaming on laptops has gone even better.

Conclusion
The Y560P was by far the best laptop I’d tried last year. It provided amazing performance for sub-$1000 mark. The Y570 continues that tradition pumping out even better performance for the same price range. This laptop seems to do what a lot of users will ask out of a laptop. Though it doesn’t stand out as much as its predecessor and lacks some simple colour mixing errors in its design, it offers the end users quite a good deal. 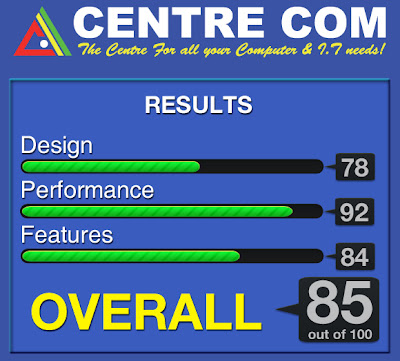