I’ve been waiting a while to get my hands on the world’s first WQHD G-SYNC display, though I’ve had a chance to play around with it in the shop, I never got a chance to fully try out the awesomeness that is the Asus ROG Swift 27” 144Hz G-SYNC gaming monitor. 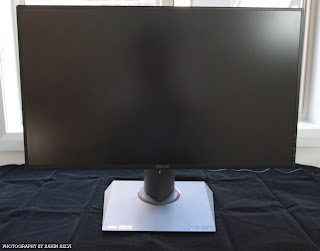 Taken from the ASUS website, The ROG SWIFT PG278Q represents the pinnacle of gaming displays, seamlessly combining the latest technologies and design touches that gamers demand.
This 27-inch WQHD 2560 × 1440 gaming monitor packs in nearly every feature a gamer could ask for. An incredible 144Hz refresh rate and a rapid response time of 1ms eliminate lag and motion blur, while an exclusive Turbo key allows you to select refresh rates of 60Hz, 120Hz or 144Hz with just one press. The ROG SWIFT contains integrated NVIDIA® G-SYNC™ technology to synchronize the display's refresh rate to the GPU. This technology eliminates screen tearing, while minimizing display stutter and input lag to give you the smoothest, fastest and most breathtaking gaming visuals imaginable. Connectivity is simple, yet robust, with a single DisplayPort 1.2 port to enable NVIDIA®G-SYNC™ and dual USB 3.0 ports for convenience.

ASUS-exclusive GamePlus Technology enhances your gaming experience further by providing you with crosshair overlays for FPS games and multiple in-game timers for RTS/MOBA games.
The ROG Swift has a super-narrow 6mm bezel that begs this monitor to be used in multi-display gaming set-ups. With VESA wall mount capability and an ergonomic stand designed with full tilt, swivel, pivot and height adjustments, the ROG SWIFT is ready for gamers of all shapes and sizes to game comfortably for hours on end.

That’s basically a rough summary of the feature packed ROG Swift. Let’s take a look at some of the finer specs in closer detail: 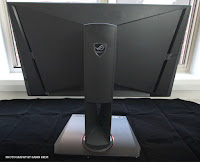 The ROG Swift has an endless list of features, but the biggest thing is its G-SYNC compatibility coupled with 144Hz display and 1ms response rate. First thing I will mention is the speed of the monitor. When you push the power button on the ROG Swift located on the back of the lower right hand side the display powers on quicker than annythinig you’ve seen before. It still boggles my mind how quickly this thing powers on! If you ever get to try one hands on, just reach your hands around the back and give the power button a few clicks, see what happens!

Design:
The design of the ROG Swift is as highly polished off as you’d expect from Asus. I’ve personally owned over a handful on Asus displays over the years so the build quality and overall aesthetics of the ROG Swift should be no less than we expect. The stand comes in a gorgeous black matte finish with a red LED ring of light that just adds a nice gaming mood to it and personally I’m a huge fan of anything that comes with LED lighting so it’s a total winner for me.

The ports on the display are located in a bit of an awkward place and the awkwardness is elevated by the angled layout of the ports which doesn’t help its cause too much. Luckily there is a cable management slit within the stand to thread some of those cables through, it’s quite a narrow slit but it should be enough for you to fit just enough cables through.

The OSD controls are neatly located on the rear of the lower right hand side which has its advantages and disadvantages, with one of the latter being you won’t be able to comfortable adjust the OSD options if you were to have two or three of these monitors side by side. I think more monitor manufactures need to look at the DELL U2913WM’s OSD buttons as an example. I own of those DELL displays and it easily has the best button setup on any monitor I’ve ever used.

The Screen:
First off let’s talk about the panel itself, it’s a TN panel. Many criticized the choice of going with a TN panel (including myself) with such a large price tag, but after using it personally over a weekend I’ve got to admit this is the best looking TN panel you will ever use. TN will always be TN but the colour production from deep blacks to rich and high contrast colours is spectacular for a TN panel. Asus has really loaded this up with a high quality TN panel and worked their background magic to make it look as beautiful as it does.

I was truly impressed.

144Hz & G-SYNC:
These two have been reviewed across the internet dozens of times so I don’t need to go into too much detail. Put simply if you want the best gaming experience or if you’re a hard-core gamer, the Asus ROG Swift is what you need. You have to play it to understand how much better games are with G-SYNC and a 144Hz monitor.

Bring on much much FPS!
To wrap up, the Asus ROG Swift is potentially the best gaming monitor on the market. It is priced at a whopping $1000+ but it doesn’t seem to have put people off from purchasing it as they’re flying off the shelves. Drop the price by 50% and I’d say this is a monitor that would be owned by the majority of gamers (including myself). 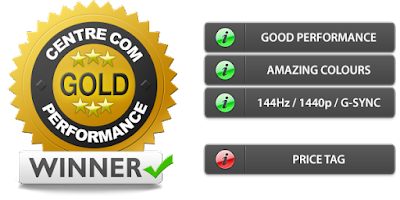