Lenovo A320 77465CM
All-in-one desktop for the stylish user!
http://www.centrecom.com.au/catalog/77465cm-lenovo-a320-77465cm-p-55613.html?sort=2a
Features
Today I’ll be looking at another all-in-one for the desktop user, this time a Lenovo A320. This mid-range desktop has the potential power to be the perfect replacement to suit the needs of the whole family, and even might entice some professional business end users for its slick design and simplicity.
Let’s take a look at what it’s got under the hood. 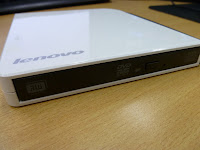 Looks pretty good on paper, however if I was to nit-pick I really would have liked a dedicated nVidia or ATI chip on the board and the fact it is using a mobile processor instead of a full-fledged desktop based CPU could be a bit off putting. Basically what it means is it has the guts of a laptop in the shape of a desktop.
Loaded on the PC is a nifty little webcam software package that lets you play around with some fun and quirky tools. The quality of the webcam seemed quite good and took a pretty neat picture.
One thing I did notice though it does not come partitioned with a data drive, so unless you partition the drive yourself, remember to always backup your data, as a full restore will erase everything off your computer. 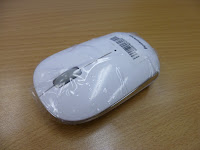 One of the important features to have on an all-in-one design is the ability to switch off the display to save power, the Lenovo A320 has this feature but in a poor action. To turn off the display you need to go into the menu of the monitor and navigate your way around to switch off the display. A little button on the edge of the screen somewhere I think would have been much better and more user-friendly.
The menu itself is a bit laggy and slow. When pressing a button, you need to give it a second or so to respond. This shouldn’t really happen with today’s monitors. 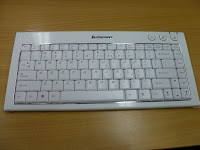 The keyboard has 3 large circle buttons on the top right hand corner for software shortcuts. Each button launches the default application for your Media Player, Internet Browser and the 3rd button launches the Lenovo Vantage Technology Start Center. Basically it has all the Lenovo built-in tools in one place including One-Key Recovery.  The recovery feature is fantastic and superfast. The one thing I love about Lenovo products is their recovery software is fantastic and always works a treat and is simple enough for even the most novice of users to operate. 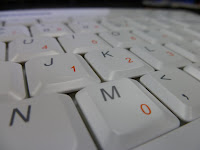 On boot up every time you’ll get the Bluetooth manager application appearing telling you your mouse and keyboard aren’t connected.  Don’t panic! You need to move the mouse around and hit a few keys to activate the Bluetooth devices, bit annoying and unnecessary. I’ve used wireless devices before on Bluetooth without the need to do this.
Design 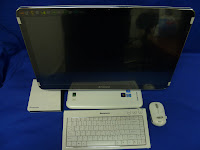 The unit comes nicely packed into a white box with several small cardboard boxes holding all the extra accessories like keyboard, mouse, power cable and the external DVD drive.
The unit is very slick and stylish, with a white and silver glossy plastic casing. The screen is elevated from the base with silver covered plastic tubing which is very sturdy and strong. Now, Lenovo market it being ultra-slim at just 18.5mm deep, but this is the depth of the actual monitor and not base, the base measures up at around 190mm (19cm) in depth. 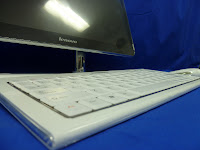 The base itself is the heart of the unit. All the parts packed into a very tight space, something I think could have used a better design. Although it looks very good, it’s quite impractical at times. Firstly, the need for an external drive. Once you plug in the external DVD drive, it changes the whole slick look of the unit. I would have opted for a slightly larger base that could hold a slim DVD drive. It also uses one of the 4 USB ports, so, there goes a waste of a port. The 2 USB ports on the side of the unit are USB3.0 and the rear ones are your USB2.0. The ones on the side I found to be quite badly placed. The angle in which I have my monitor kind of sits right over the ports, so when I tried to plug in a device, my average sized hands found it a bit difficult to get in there to plug it in. The rear ones were no better having me stand up to be able to reach over the monitor. The base should have been made to stretch the width of the monitor so users can easily access the ports. The size of the base is smaller than majority of laptops so I think Lenovo definitely had the chance to make it a bit bigger and fit better options into it. 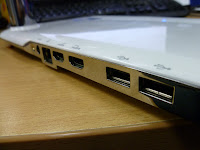 At the rear of the base I notice the Ethernet port, power port and TV-in to be side by side. This could be problematic if you wanted to use all three at the same time because the power plug is a 90-degree plug, which means if you have it on either side of it, it is going to block one of the ports on the side of it. Your only option is to go up! This contradicts the sleek design. 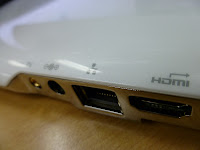 The keyboard and mouse are wireless Bluetooth components and are fantastic. The mouse looks pretty ugly I must admit but feels amazing under your hands and is extremely comfortable. The keyboard is no less, though it is a compact design, typing on it feels wonderful and even packs its own number pad with the use of the Fn button. I’m not quite sure why they added this in considering there is a row of numbers beneath the F keys, but it does seem encouraging to see Lenovo haven’t left things out.
Overall, though the base of the unit lacks good design fundamentals, when put together, it looks fantastic and would add a stylish and modern look to your home or office. It comes with a plethora of inputs and outputs which give good connectivity options for its users.
Performance 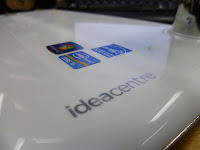 Featuring a mobile 2nd Gen Core i5 Processor, this unit has a lot to prove itself. Out of the package the unit was a breeze to setup and initialize, and like many other machines, comes loaded with a bunch of software (which in many scenarios you’ll never use).
Booting the unit came in at 1min 17s, this was a not the result I was hoping for. I was expecting a slightly better performance result than this. Many of the laptops I have reviewed in the past absolutely cream this result, including Lenovo’s own Y560p which proved to be a possible desktop replacement. However I did notice that boot time was lengthened after Windows initialization which leads me to believe the excess software and start-up services were tugging this machine down, so I did a bit of tweaking, uninstalling and general cleaning up (a brand new machine) and got the boot down to 1min 5s, which is reasonable. A reduction of 12s is fairly large although I do believe if I had this unit formatted with a fresh clean copy without all the excess baggage; it would come down even more.
Some of you may be asking, why am I referring to laptop results in comparison, well the fact is the unit has a mobile processor which is used in laptops and comes with a 5400RPM hard drive, which is identical to the majority of notebooks. The specs in this unit are those used in laptops, so it is a fair comparison.
General software tasks like Office & Excel were usual as expected, nothing out of the ordinary performance wise. Video editing and photo manipulation was a breeze on the desktop. The processor was quick in rendering and the 4GB memory means working with fairly large Photoshop files handle easily.
The 21.5” LED display looks very sharp and clear. There are no blotchy spots or blurriness anywhere on the screen. Full HD videos looked very nice and the colours were rich and vibrant. The displayed showed blacks very well and I didn’t see any pixilation in dark areas when watching movies. This is useful for those wishing to use the screen as a secondary monitor thanks to its HDMI and TV inputs. People can easily hook up their PS3’s to the monitor which provides an awesome close up gaming experience. 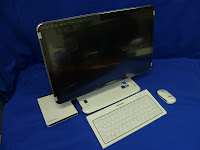 The noise level on this unit was quite comfortable and not until the unit is fully loaded for a lengthy amount of time does it start getting a bit louder, however it never reaches an uncomfortable level and most users will find the quietness pleasing.
Audio was very good. Watching movies gave a nice sound and music sounded evenly well. Though it lacked lower sub levels altogether, it doesn’t over do the higher levels and give you that tinny sound like many other low quality speakers do. It gives a nice flat comfortable and loud sound.
Our Cinebench software gave us the following test results:
CPU: 2.51pts
OpenGL: 7.87fps
Nothing unusual about these results, the OpenGL performed as it should have considering it has an Intel HD3000 graphics processor. The CPU results sit perfectly in between the mobile i3 and i7 processors which are more than expected of it to.
Our PCMark07 benchmark gave a result of 2059 PCMarks. |
Our 3DMark11 produced a result of Nothing. The lack of DX11 hardware didn’t allow the test to begin, so I gave a test using 3DMark06 and it scored 2986 3DMarks
Temperatures were interesting in the unit. It was a bit too hot for my liking. The machine idled in around 45-50 degrees for the CPU and peaked in around the 80 degree mark. This is a big jump in temperature from idle to load. The problem I think stems from the plastic covered base with no decent ventilation or exhaust. If you use this unit in a hot environment and the CPU hits the 100 degree mark, you’re looking at a system failure shutdown and potential permanent damage. Though I must make it clear it is very difficult to achieve such high temperatures on any computer. So don’t be discouraged by what I’ve written. It is my duty to ensure you, the customer, know everything about the unit before purchasing. 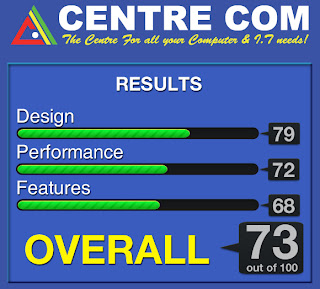 The Lenovo A320 has a few design flaws that could have been avoided with a bit more thought into its design, but it is constantly overshadowed by the beauty and performance capability of the unit. It looks and feels fantastic to use and I believe they are important factors when it comes to all-in-one desktops. Lenovo has given customers the perfect replacement for that box sitting under your desk with a well built, stylish and comfortable desktop unit that though has a few design flaws and interesting choices in internal hardware, proves to perform above expectations. This unit can also be beneficial to business owners who need the power of a full sized desktop in a compact, stylish and modern look.
By Sahin Selvi
sahin.s@centrecom.com.au
The benchmark results may differ from user to user depending on what background software you are running and versions of benchmark software. These results aren’t portrayed to be seen as exact performance figures but merely as a rough estimate on the performance of the machine. These results are in no way bias to any company or person and are here to provide the end user in depth details and to provide extra assistance of potential purchases. All information on this page is subject to copyright. Please do not copy any parts of this article.
Posted by Centre Com at 11:20